Conservation cannot be achieved by a single individual. The DiCienzo family would like to recognize Earl Plato (October 1931-December 2017) for his contributions to Marcy’s Woods. A noted historian and naturalist, Earl’s rich legacy continues today in part to the knowledge he shared with visitors to Marcy’s Woods. Well known in the communities of Ridgeway and Fort Erie, Earl led guided tours of Marcy’s Woods to those who also admired its significance. He was the founding member of the Bert Miller Nature Club, and the Bertie Historical Society, and was the recipient of life time achievement awards for his work in both nature and history. His impact continues to be felt through his many books and newspaper articles, and the enthusiasm he shared with visitors to the nature reserve.

Our Afternoon in Marcy’s Woods

This is the day that the Lord has made
Let us rejoice and be glad in it!

Fifteen nature lovers joined Allison Kells and her family for our spring hike in Marcy’s Woods. The sun shone, flowers were in bloom, the birds sang and the bugs stayed away; what more could we want? Well, perhaps a clearer look at that pileated woodpecker we thought we saw.

The tulip trees were as impressive as ever. We also saw red and white trilliums, jack in the pulpit, mayapple, wild ginger, columbine, skunk cabbage and solomon seal.

We appreciate the DiCienzo family’s willingness to share this beautiful Carolinian haven with the community. Allison’s tour allowed us to learn more about this very special piece of God’s creation. 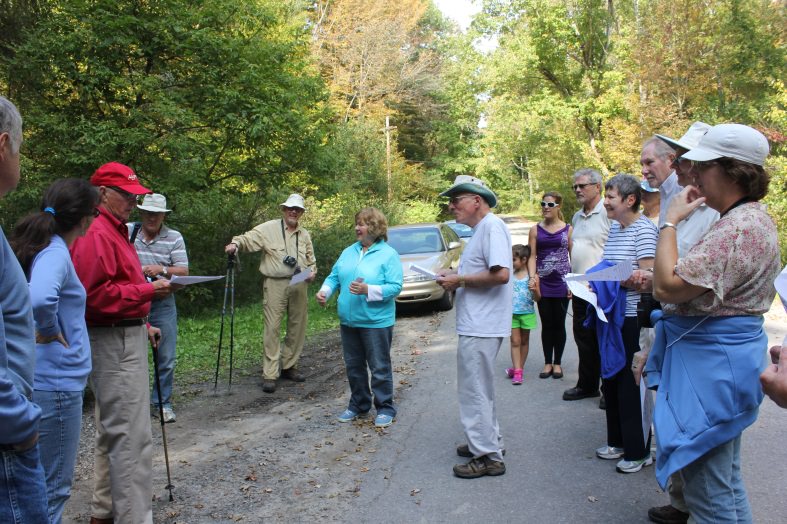 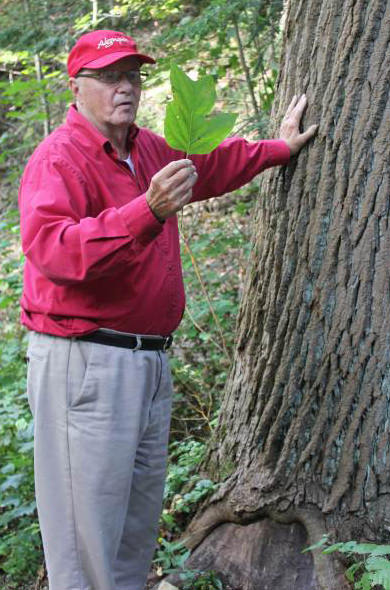 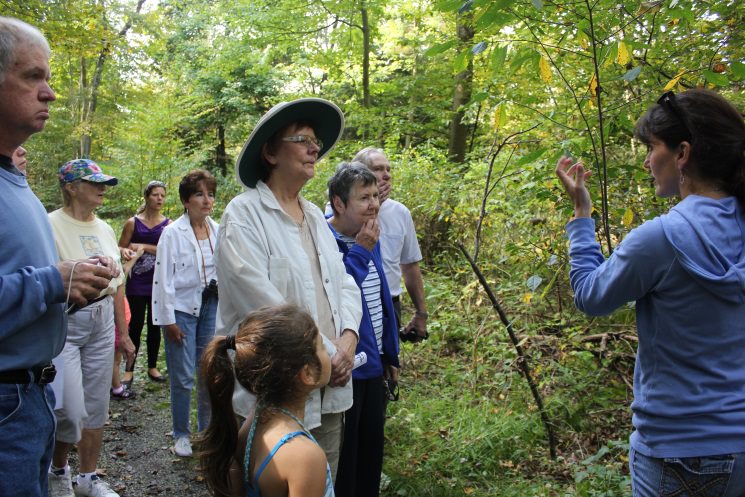 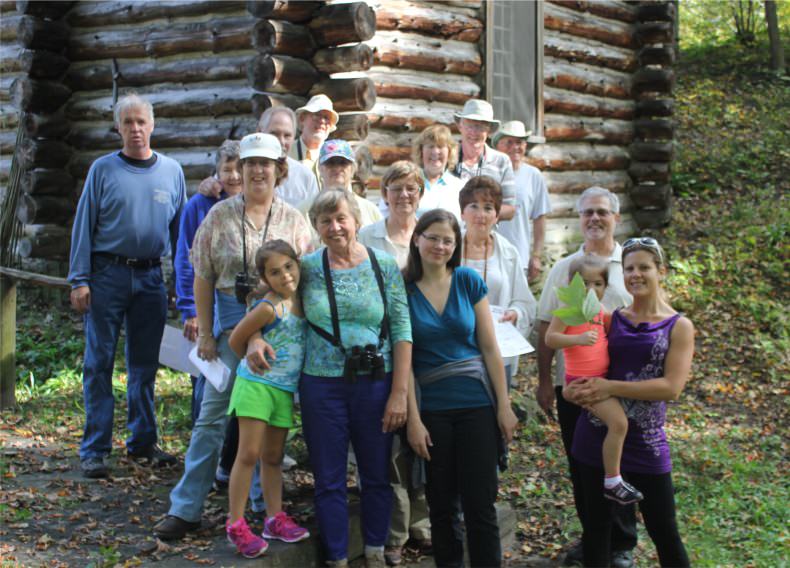 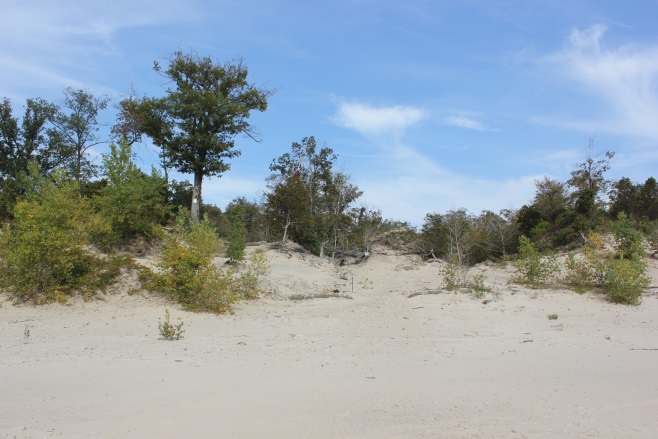 To walk in the woods this Fall such as Marcy’s brings peace of mind. Thank you Dino DiCienzo Sr., present owner and the late Dr. George Marcy for this continued privilege.

“Cast cares aside and solace find.
This is no place to plot and scheme
But a place to think perchance to dream.”

No Hamlet I, but on walks in Marcy Woods I often stop and look and perchance to dream. One blustery day the winds sweep down through beginning from tree to tree along the edge of the great forested sand dunes to my right. The big hemlocks to my left hardly move despite the increasing force.

The trees around me and above on the slopes and crest are leafless skeletons. The maples, beeches, and oaks reveal all their differences. I look to my left on that Lower trail of Marcy Woods as I trudge along then I stop. I recognize all around me at Twin Oak Hill the stolid black and red oaks standing in their structural poses, seemingly oblivious to the winds. Not so. for the strong winds have split the right twin oak. It has fallen to the ground in last year‘s storm.

As I round the bend and head southerly there are the leaning trunks of the great, gray birches. The sound of the winds dies away in this protective part of the trail. This is past the time of falling leaves. It is still time to see the framework of each deciduous tree that was once lost in its clothing of green in summer. Stop and scan each tree as it takes on new individuality through curve of limb, tilt of trunk or openings or subtle markings. I love this opportunity to see the deciduous trees in this fall/winter setting. Yes, I stop for a moment at the towering Tulip tree. One of my favourites.  I look up. High in the branches in the maze of the topmost twigs are remnants (calyxes) of the base of its distinctive  flowers. Many are still clinging tightly.

Perchance to reflect in this peaceful setting. I believe that some of these great oaks have been here before the coming of the European settlers. Those earlier trees in Niagara provided the settlers with shade and lumber, firewood and material for a thousand-and- one home-crafted aids from axe handles to bobsleds. But two of the largest and most valued trees are all but gone. Those were the American elm and American chestnut. All but wiped out by the Dutch elm disease and the chestnut blight we are told of their weathered remnants forming stark landmarks in area  fields and woods. 2011 will see the gradual return of these two of the most beautiful trees of Niagara, the American elm and American chestnut. Believe it! Think about it. Here as 2011 approaches I should live so long.

We stopped on the driveway beside the west side of the old Marcy cabin. It was a mild mid-October afternoon. Daughter Allison and I were discussing the plant, the Virginia waterleaf. We had a leaf in hand with no usual water marks on its green surface. I said, “We’ll take it home and use my Audubon guide book.”  Just then Allison exclaimed, “ There’s a frog!” Actually there were two little frogs hiding in the fallen leaves and forest debris. She was finally able to catch one of the little guys. Yes he had the telltale black mask. We had a Wood frog.  It was about four centimetres in length. He was only half grown. Primarily it’s a nocturnal frog except at mating time. But here they were in broad daylight,

On page 381 of the Audubon Amphibian Guide book says that after their few short days of mating they “…disappear into the surrounding country.” All the years of walking the trails of Marcy Woods this was only the second sighting of Wood frogs after the mating season for me. Audubon’s guide use of the word “disappear” seems quite appropriate. They hibernate in the forest debris during winter. A most remarkable frog. Next spring at DiCienzo’s  Marcy Woods pond I will lsyen once again to their loud “Quackings” at their mating time.

Writer’s note: On the cover of my new book, When Nature Calls, is my sketch of the Wood frog.

Teale’s Trail Wood Nature Center, located in Connecticut, is on the same latitude as our Marcy’s Woods. It has seven walking paths radiating from his house. They cross the fields that surround the white-sided home. They become well trodden trails and thread their ways through the woods and into wetlands, along brooks, across boulder fields and over ridges. Then they meander into ravines among ferns and wildflowers until you reach the pond and a waterfall. Climb up the juniper clad hillsides and back by the beaver dam and past Teale’s little log writing cabin nestled among the aspens.We stopped and entered the little writing building and looked over the large pond. Hampton Creek is ahead with a cascade foaming over its rocks as it crosses Old Wood Road.  Winding, branching, and crisscrossing these seven trails of Trail Wood run for a total of a little more than three miles  (6 km). It seemed longer.

It was three years since I realized my goal. We finally reached Trail Wood and walked some of the paths of Edwin Way Teale‘s treasured setting. A great thrill!

Worth trying too is Backus Woods, near Long Point It has many trails to explore. It is a Carolinian setting like Marcy Woods and not  too far away. Good trail maps are available at the Centre, Be curious in nature. Walk some of Niagara’s nature trails this Fall.

Members of the Niagara Falls Nature Club enjoyed our walk at Marcy’s Woods last Thursday. We had a beautiful night. Thank you for allowing us to reschedule.

27 hikers came including a few who had never seen the Woods before. The highlights of our walk were the profusion of blooms, the many wood thrushes singing, a scarlet tanager and the gorgeous sunset we enjoyed walking along the beach to our cars.

83 members and friends of the local
Bert Miller Naature Club walked DiCienzo’s Marcy Woods.
They divided into four groups with nature wise leaders.
Earl Plato handede out brochures and maps of the Woods and
welcomed the group. Lynda Goodridge organized the large group.
Birds, amphibians and wildflowers ewere in the Woods that day. Trilliums
were still blooming. Alas the famed Wood frogs had moved on.
Much appreciation to the DiCienzo family, owners of Marcy Woods.
Some took the Upper Bird Trail. Others walked the ridge along
Little Hemlock Ridge to the Marcy seat among the four towering
Basswood trees. Many want to return. Earl Plato reporter

10 ladies from Niagara-on=the-Lake met with Earl Plato and daughter Allison at Marcy Woods. Hostess was Jena Scarlett who arranged he walk. The weather was ideal and few mosquitos. Earl on his new scooter named the Rambler was able to comment MORE easily. Some of the ladies including Mrs. Scarlett were very knowledgable. At the cabin we met Dino Sr. and two of his grandsons. hey were to work around the old Macy cabin. Jena lead the ladies to the lake or back down the refurbished steps. It was a perfect day for all. Earl Plato

Trees down in Point Abino area a result of great windstorm. East gate unable to be opened because of fallen tree. Let Dino Jr. know. Cleanup will follow. Going on walk next week.

Glorious September 3rd, 2009
Thank you DiCienzos for preparing the Lower Trail/
Magnificent! Now old people like me can walk easily. September 11th We take a very elderly couple for a Marcy hike. Today daughter Allison, granddaughter Ashlyn and I walked the recovered Trail. Great walk despite myriad of mosquitoes. Soon frost will come or some cold nights and the little buggers will disappear. Earl Plato Lover of Marcy